MASTER
Home
About
Get There
Tickets

From the misty regions of a television pioneer's imagination to the main stage at ARC...

In 1959, Rod Serling set out to create a new kind of television show, one that would challenge the status quo and tackle important issues that other writers were afraid to explore on TV. Serling expertly utilized science-fiction tropes as metaphors for very real issues lurking beneath the veneer of American society. Recognizing the need to unmask racism, peel back questions of identity, explore greed and paranoia, and wrestle with the nature of our existence, Serling ushered in an entirely new form of entertainment, one that resonates as much now (perhaps even more) than it did almost 60 years ago.

Our stage production of The Twilight Zone zeroes in on four classic episodes, each of which explores a different theme. The production also includes aspects of Rod Serling’s life and work; we get to know the man behind the show and develop a deeper understanding of how and why he created one of television’s most important series ever. After all…

“There is a fifth dimension beyond that which is known to us. It is a dimension as vast as space and as timeless as infinity. It is the middle ground between light and shadow, between science and superstition, and it lies between the pit of our fears and the summit of our knowledge. This is the dimension of imagination. It is an area which we call the Twilight Zone.”

To purchase tickets in general, select TICKETS option.  (To see theatre seating plan and choose your own seats, please access this site through a computer instead of a mobile device.)  If message says "No Tickets Available", that just means we have stopped online sales in order to do box office sales.  Please come to the box office.  There are plenty of walk up tickets available. 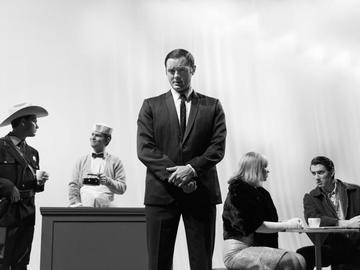 No Refunds or Exchanges

Sorry, no children under 4.

other events by this organization