MASTER
Home
About
Get There
Tickets

ARC'S LYSISTRATA IS LIKE NO GREEK PLAY YOU'VE EVER SEEN!

The story of Lysistrata is as hilarious as it is topical.  It is the most popular of all Greek comedies, wherein the women of the Greek cities band together to end the wars by withholding sex until the men agree to sign a peace treaty.

If one were to accurately translate Aristophanes' Greek comedy Lysistrata — truly following the meaning of the original language — one might find that those ancient Greeks were a pretty sexy, raucous bunch!  Tender ears beware, that is exactly what translator Sarah Ruden has done.  Now Rudin's bawdy translation has been brought to life by the American River College Theatre. This  production of the comedy adds to the danger, and the fun, of this hilarious play by offering seven live-streamed performances (Nov. 27 - Dec. 6).  It's honest-to-goodness live theatre, with all the excitement and potential mayhem that live performance offers, but from the comfort of your living room.

Rudin's naughtily accurate language, as well as the brief appearance of those pesky nude puppets, nets this production an "R" rating.  However, ARC's spirited actors and their fearless director also rate it G for good fun!

Produced under conditions that can best be described as unfriendly to live theatre, Lysistrata's director Pamela Downs decided to give her actors and her audience the rush of doing an online show live.  This means she has all sorts of contingency plans, each designed with the audience in mind.  If someone's screen locks up, another actor is at the ready.... if someone's audio is garbled, the audience will hear the lines from another source... as if by magic.  This "magic" will come after roughly two months of preparation, and weeks and weeks of technical rehearsals.

Ticket Price:  To be able to serve as many people as possible during these times, the cost of each ticket is "pay-what-you-can." Audience donations help defray the expenses involved with the production﻿, and are much appreciated.

Information to access the livestream will be on your receipt and confirmation email.  For assistance: email [email protected] 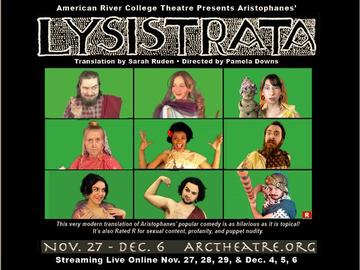 No Refunds or Exchanges

other events by this organization